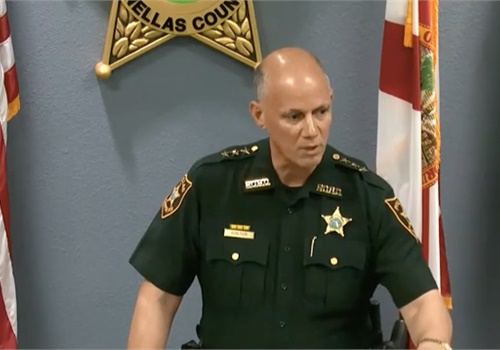 When three Florida teenagers stole a car, crashed it into a cemetery pond and then drowned, Pinellas County Sheriff Bob Gualtieri talked about his frustration, about lives "needlessly lost," and how the vehicle became a death chamber for the three girls.

Now, nearly a month after the tragedy, Gualtieri is angrily defending his agency against accusations that his officers didn't do enough to rescue the girls as the car sank in 15 feet of water. Bloggers, some TV stations and comedian D.L. Hughley have posted about the March 30 incident that claimed the lives of two 15-year-olds and a 16-year-old from St. Petersburg.

"Police caught on tape watching girls die. They didn't even try to help. Just watched. Sickening," Hughley wrote Friday morning on Facebook. His post had more than 5,000 reactions and 7,000 shares.

The posted dashcam video, which Gualtieri said was a "misleadingly" edited version of the original, shows the scene and includes audio of some of the officers. One deputy comments that he thinks he hears screams coming from the car and another says, "They are done. They are sig-7 dude." Signal 7 is law enforcement code to indicate a fatality. Commenters on Facebook widely criticized the deputies for not going into the water and trying to save the people inside the sinking car.

Later Friday, Gualtieri posted a different dashcam video from a second cruiser on the department's Facebook page showing two officers walking by with clothes in hand. Gualtieri said that deputies waded into the water and tried to save the girls - and that the video proves it, CBS News reports.