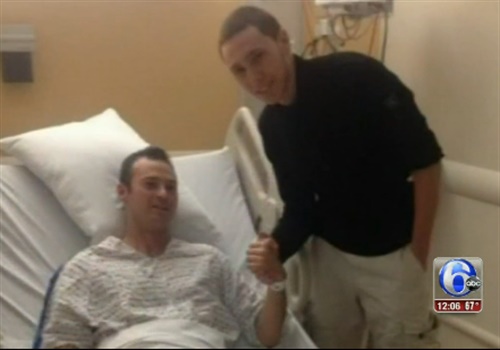 A 19-year-old man who rescued a Philadelphia police officer from a burning patrol car recently graduated from the Delaware County Police Academy. His chance encounter with Philadelphia Police Officer Matt Kimsey led him to seek a career in law enforcement.

Their paths crossed when Officer Kimsey found himself trapped in his patrol vehicle, which was on fire, and Chambers, then a volunteer firefighter, pulled him to safety, reports WPVI.

"Hopefully when he looks at me, he's kind of like my brother, so hopefully he's seeing a little brother walk across the stage," said Chambers.

"Absolutely proud. I couldn't think of a better person to walk across the stage and want to be a police officer," said Kimsey. "I look up to him just as much as I hope he looks up me."

Since Kimsey's recuperation, the pair have remained close - Kimsey like an older brother encouraging Chambers to rank and file.

Almost two years later, alongside his family, Chambers had the man who inspired him to wear a badge cheering him on.