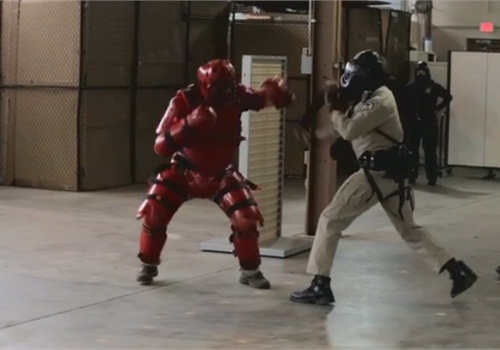 CHRIS BURY: In Philadelphia, this new police recruit is getting a taste of confronting a suspect that he may have to shoot. This training–in full protective gear–is known as a reality-based scenario.

CHRIS BURY: This is a lesson in defusing high-tension encounters….before they turn deadly. In Philadelphia, every officer gets 40 hours of this reality training to learn tactics other than lethal force…even when suspects are armed and dangerous.

SGT. KENNETH GILL: Is he threatening anybody right now?

SGT. KENNETH GILL: Is he killing anybody right now?

SGT. KENNETH GILL: So, do we have to turn around and jump right in there and take care of it ourselves?

In a statement, former President George W. Bush said he and his wife Laura "were saddened by the sudden loss of Keith Mills." Bush called Mills a "dedicated public servant and exemplary member of the United States Secret Service.

Mayor Keisha Lance Bottoms said 90 police recruits are currently in the pipeline, and that she is working with the City Council to enact a retention bonus for officers. The department is about 400 officers under its authorized level.

On Tuesday, city leaders heard from City Manager Spencer Cronk, who created a blueprint for restarting cadet classes. The blueprint lays out necessary changes that must be made before the academy starts, such as finalizing replacements for outdated and problematic training videos and bringing in a variety of community members to help teach courses.

Under the proposed legislation, in order to receive a permanent position as a law enforcement officer, probationary police officers must have a bachelor's degree with a major or a minor in social work.

The VR-DT was chosen in August 2020 by California POST following a competitive procurement process for its VR Force Options Simulator requirement. InVeris will deliver 50 systems during a six-month period as part of a $2.6 million contract award with the option for up to $5 million in additional systems and related equipment.