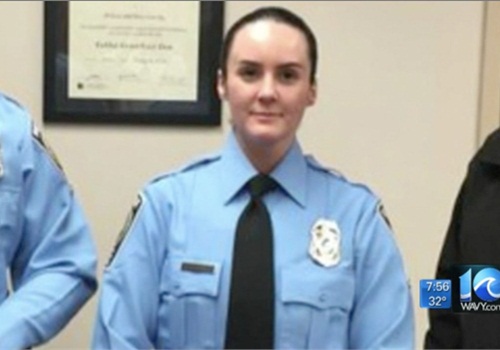 VIDEO: Man Charged with Killing Virginia Officer on Her First Day on the Job

Authorities identified the suspect accused of shooting and killing a Prince William County, VA, police officer a day after she was sworn in, and wounding two of her colleagues as they responded to a call about an argument at a northern Virginia home.

Officer Ashley Guindon died from the injuries she sustained in the shooting. A Prince William County official said the alleged shooter’s wife was also killed in the domestic dispute Saturday.

The Prince William County Adult Detention Center confirmed that the suspected gunman, identified as Ronald Hamilton, an Army staff sergeant assigned to the Pentagon, is being held in their facility without bond for the shooting. A court appearance is scheduled for Monday.

Prince William County Commonwealth Attorney Paul Ebert told the Associated Press the gunman was charged with capital murder, first-degree murder, two counts of malicious wounding of a police officer, and three counts of use of a firearm in commission of a felony. Virginia law allows for the death penalty for the murder of a police officer.

Deputy Anthony White and Deputy Kenny Ingram were killed when state troopers said their county-issued vehicle struck a tractor-trailer that had stopped for traffic in the left eastbound lane near Exit 190 on Interstate 20 eastbound in Columbia County, the Fulton County Sheriff’s Office confirmed.

A 19-year Sheriff's Office veteran, the officer was a member of the SWAT team, which was helping U.S. Drug Enforcement Administration agents serve a high-risk warrant at the home, Sheriff Mike Williams said.

Officer Joe McCrink completed more than 1,000 miles of bike rides in the month of September in an effort to raise awareness of—and increase funding for—childhood cancer.

Florida Officer Who Saved Infant's Life to be Honored at Ceremony

An officer with the Orlando Police Department who saved the life of a one-year-old girl at the scene of a vehicle collision will be honored by the department and the community at a ceremony on Tuesday.

Minnesota Officer Shot At During Investigation of Alleged Car Burglary

An officer with the St. Paul (MN) Police Department was shot at during an investigation of an alleged car burglary Monday night.

A New York Supreme Court judge has ordered a public inquiry into the case of Eric Garner, who died while in police custody in 2014.