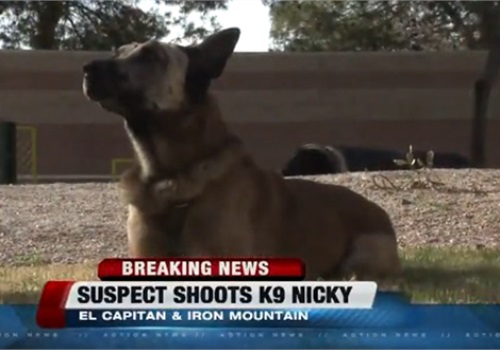 Two people and Las Vegas Metro police K-9 Nicky were killed on Thursday afternoon during an incident in the northwest part of the valley, reports KTNV.

According to police, patrol officers were dispatched to a residence to investigate a possible shooting. They also received calls that a man with a gun was walking down the street and firing shots.

Upon arrival, officers encountered the armed male in the street. The man was told to drop the gun and Las Vegas Metropolitan Police Department K-9 Nicky was deployed.

The man refused to surrender and shots were exchanged between the police officers and the man. The K-9 was struck by gunfire and was pronounced dead at the scene.

K-9 Nicky is the same dog who was attacked by a suspect with a machete during an incident after a 12-hour standoff in February and suffered multiple cuts to his head. The 8-year-old K-9 had just returned to duty with his handler on March 10.

The suspect, who was struck by gunfire, was transported to UMC Trauma for treatment. His current condition is not known.

Police also found two people inside of a home in the neighborhood who had been shot. Both people were deceased.

Video: Las Vegas K-9 Back on Duty After Recovering from Machete Attack