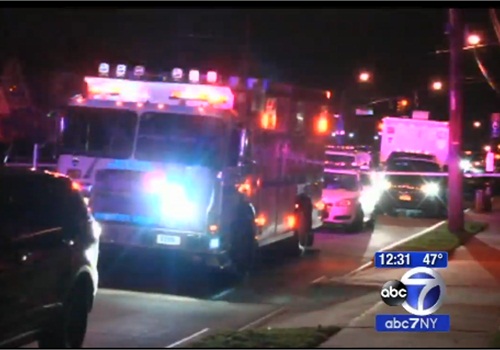 An off-duty NYPD officer fatally shot one of two men who allegedly were trying to rob him Monday night during a Craigslist scam in Queens, reports WABC.

The officer was held up around 10:30 p.m. while responding to a Craigslist ad for a used white BMW, according to the New York City Police Department.

The officer met two other men on 145th Road in Springfield Gardens where they started to haggle over the supposed price of the BMW. One man pulled out an air pistol and took the off-duty officer's wallet, police said.

The officer pulled out his service weapon and fired several times, hitting the suspect in the leg and torso, police said.

The suspect, identified as Devon Holder, 30, of Brooklyn, was pronounced dead at Jamaica Medical Center. A second man jumped into the BMW and fled the scene. Police are still looking for him.

LT. David Grogan began calling out to the trapped residents when he heard a woman respond and then crawled onto the balcony and into the burning apartment to locate her. He found the woman and pulled her onto the balcony where firefighters were waiting. Lieutenant Grogan helped lower the woman onto a fire truck ladder where she was helped to safety.

Citizens in DelMarVa—the peninsula that is shared by the states of Delaware, Maryland, and Virginia—will continue with plans to show appreciation for local law enforcement officers this week despite concerns about COVID-19.

Two civilians in Virginia are receiving praise and thanks from the Virginia State Police Department for coming to the aid of a trooper who came under attack during a recent traffic stop.

An officer with the Ross Township (PA) Police Department was injured after attempting to reach into the car at a traffic stop to turn off the engine when the subject suddenly attempted to drive away.

Twelve adults arrested in the rioting face a variety of felony and misdemeanor charges, including arson, riot, institutional vandalism and criminal conspiracy. One defendant also faces a charge of illegal possession of a firearm.

Chicago Officer Struck by Vehicle While Standing at Barricade

An officer with the Chicago Police Department was injured when a motorist struck him as he was standing at a barricaded area on the north-west side of the city on Tuesday night.

A man has been indicted on Federal charges of providing a firearm used in the shooting of two Tulsa (OK) police officers earlier this year.