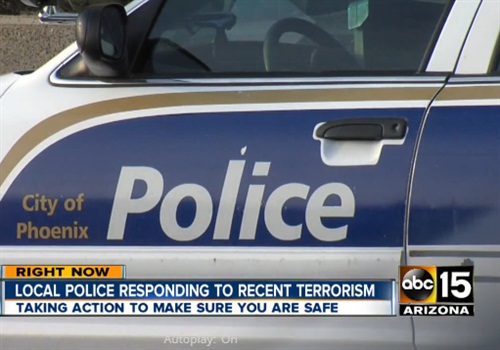 As the war against terrorism continues, the Phoenix Police Department is one of the few agencies in the country offering specific training for its officers on gathering intelligence online to spot potential threats and prevent attacks by terrorists, reports KNXV-TV.

Under its Homeland Defense Bureau, Phoenix Police created its Intelligence Officer Program, where officers are trained on how to use military intelligence while in the field. The officers specifically learn how to access certain databases that aren't typically available to patrol officers.

Phoenix Police Lt. Pat Tortorici, who served in the military and helped roll out the program, said the information gives officers the ability to track people or work a dynamic scene better.

When Tortorici is not in the field, he's teaching future law enforcement students at Northern Arizona University, specifically focusing on military intelligence.

Tortorici said the Phoenix area is well-prepared compared to other areas because of large events like the Super Bowl. Several agencies, on the city, state, and federal levels, trained for months to make sure communication would be seamless in case of an attack.