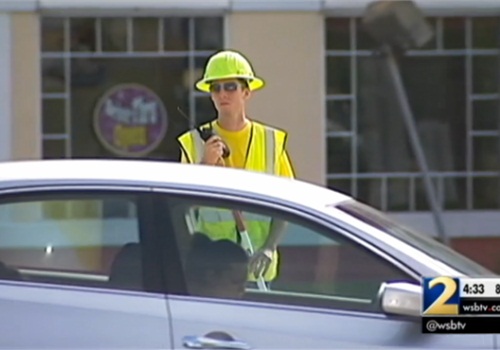 Marietta, Ga., police officers dressed up as a construction crew at a busy Cobb County intersection Wednesday to catch distracted drivers in the act.

Most drivers paid no attention to the road crew working at Cobb Parkway at Roswell Road, but the crew wasn't radioing in survey readings -- they were busting distracted drivers.

“What we've done here is we're able to put officers in the roads so we're able to get close enough almost inside their cars so we can look down and see exactly what they're doing on their phones,” said Marietta police Officer Nick Serkedakis.

Police say making good distracted driving cases are tough because it is often challenging to figure out exactly what the driver is doing in the car. This way, their cases are much stronger.

"It doesn't matter if you're stopped at a light, if you're on a public thoroughfare and facing the phone we're going to have a conversation with you,” Serkedakis said.