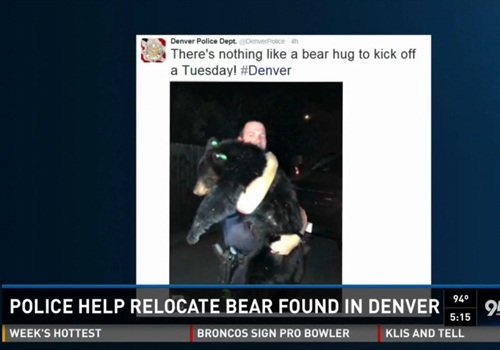 Denver Police Department Officer Dan Swanson had just started his overnight patrol shift when his wife called and told him there was a bear wandering around in his district. Then when residents reported a bear lying down in their backyard the 15-year veteran was one of the responding officers.

"Oh it was awesome," Swanson said. "It was one of the coolest things."

The one-year-old bear was eventually tranquilized and taken away. Swanson offered to carry the bear to a trailer because wildlife officials had been working for 18 hours straight.

Denver Police snapped a picture of Swanson and posted it on Twitter with the caption, "There's nothing like a bear hug to kick off a Tuesday!"

The picture of the officer carrying the sedated bear like a child is going viral.

Wildlife officials say a food shortage is causing bears to stray from their normal habitat and go into neighborhoods looking for something to eat.