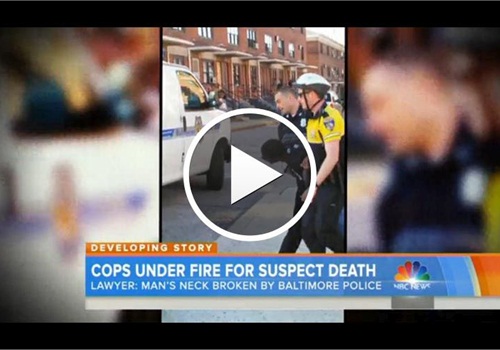 A 27-year-old Baltimore man died Sunday a week after an encounter with police that left him with a severed spine, according to a lawyer for his family.

Freddie Gray was arrested for yet-undisclosed reasons April 12 after fleeing police on foot. It was unclear when Gray's injury occurred. His death was confirmed Sunday by the University of Maryland Medical Center, NBC News reports.

William Murphy, a lawyer for Gray's family, said Gray was healthy before the encounter and that cops chased him "without any evidence he committed a crime."

"His take-down and arrest without probable cause occurred under a police video camera, which taped everything including the police dragging and throwing Freddy into a police vehicle while he screamed in pain," Murphy said in a statement, adding that Gray's spine was 80 percent severed at his neck while in police custody.

Baltimore police promised a full investigation and officials vowed to get answers about what happened to Gray.

"I want citizens to know exactly how it happened," said Police Commissioner Anthony Batts, who promised to "hold the right people accountable."

A protest was held Sunday outside the station house where Gray was taken after a rally was held there Saturday night, according to the Baltimore Sun.

The events were organized by the Baltimore activist group People's Power Assembly and Justice League NYC, who diverted their "March2Justice" to Washington, D.C., "to stand in solidarity with the family of Freddie Gray," the paper reported.

A New Jersey officer found and rescued a suicidal woman who survived an overnight leap from a bridge and suffered serious injuries.

An NYPD officer was seriously injured when he was pinned between two cars during a traffic stop after a hit-and-run driver crashed into the vehicles.