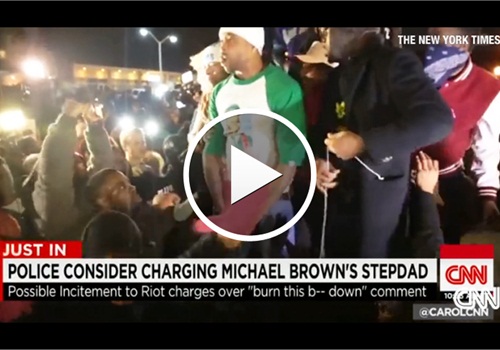 VIDEO: Did Michael Brown's Stepfather Incite a Riot and Break the Law?

Authorities are investigating whether Michael Brown's stepfather intended to incite a riot last week when he urged a crowd in Ferguson, Missouri, to "Burn this bitch down" after the grand jury's decision was announced, the city's police chief said Tuesday.

No charges have been filed against Louis Head in the incident, but police have interviewed people who know Head and who were with him November 24, the day a prosecutor announced that Officer Darren Wilson (who has since resigned) would not be indicted in the August 9 shooting of Michael Brown, Police Chief Tom Jackson said.

Shortly after St. Louis County prosecuting attorney Robert McCulloch's announcement, Head stood above a crowd of demonstrators -- some of them shouting "F--- the police!" -- and yelled, "Burn this motherf---er down!" and "Burn this bitch down!"

Ferguson, already tense from weeks of awaiting the grand jury's decision, erupted following McCulloch's news conference. A row of businesses on West Florissant Avenue, a major thoroughfare in the St. Louis suburb, was engulfed in flames. Police cars and vehicles at a nearby dealership were turned into fireballs. There were so many blazes that firefighters couldn't reach all of them.

Police have not spoken to Head about his actions, but they intend to do so, Jackson said, adding that multiple law enforcement agencies were involved in the investigation.