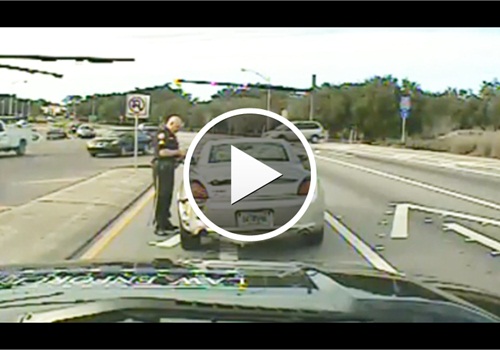 A Gulf Breeze, Fla., police officer was seriously injured Monday afternoon when he was run over by a motorist during a traffic stop, according to law enforcement officials.

About 2 p.m., Sgt. Kerstan Tatro stopped Amy Lee Giorgio, 30, after seeing her driving erratically near the south end of the Pensacola Bay Bridge, Gulf Breeze Chief of Police Robert Randle said. As Tatro was standing by Giorgio's driver's side window speaking to her, he reportedly noticed Giorgio trying to put her Lexus CV into gear.

Tatro reached into the window in an attempt to grab her car keys out of the ignition, Randle said. Giorgio accelerated with Tatro still partway in her window, carried him a short distance and ran him over when he fell from the vehicle's side.

Tatro was taken by ambulance to a local hospital. His arm was broken.

A motorist who saw the incident called 911 and followed Giorgio to the rear parking lot of the Crowne Plaza Pensacola Grande Hotel. The Pensacola Police Department arrived at the parking lot moments later and took Giorgio into custody.