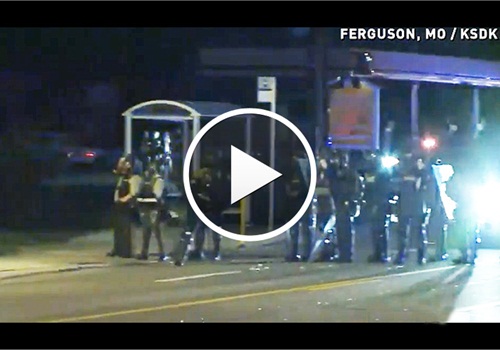 Monday night in Ferguson, Mo., near the site of an officer-involved shooting that killed a reportedly unarmed 18-year-old man, officers in riot gear lobbed tear gas at angry crowds. There were 15 arrests but no reports of looting.

Ferguson Police Chief Thomas Jackson said members of the crowd threw rocks at police and gunfire came from the crowd, so officers used tear gas and shot "beanbag rounds" meant to stun them. Jackson told USA Today that police blocked off the area where most of the looting and vandalism occurred the previous night out of concern that cars passing by might hit demonstrators in the street.

According to an investigative report by the local Fox 9 news outlet, the three council members, Andrea Jenkins (Ward 8), Phillipe Cunningham (Ward 4), and Alondra Cano (Ward 9), were granted a security detail shortly after Memorial Day, which cost the city about $4,500 a day and ended on June 29.

An Eaton County deputy located Sean Ernest Ruis' vehicle at about 7:13 a.m. in a neighborhood several miles away on Jerryson Drive in Delta Township, MSP Lt. Brian Oleksyk told the Lansing State Journal. When the deputy made a traffic stop, Ruis got out of his vehicle and approached the deputy with a knife, Oleksyk said.

The officers were reportedly marching with community members protesting the city's unprecedented rise in gun violence. It appears they were attacked by anti-police counter protesters.

Officer Jonathan Shoop, 32, started his law enforcement career with the Bothell Police Department on June 3, 2019. Before joining the Bothell PD, he served in the Coast Guard.