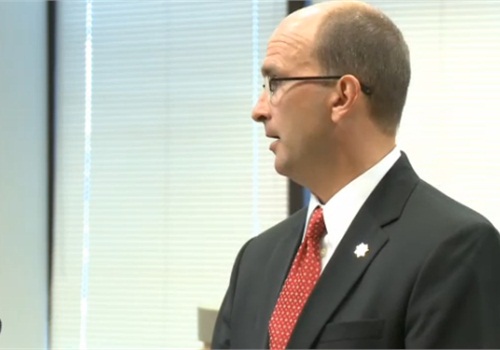 An Oklahoma prosecutor filed notice Thursday to seek the death penalty against 30-year-old Alton Nolen, who's accused of decapitating one co-worker and stabbing another in a gruesome attack at a food-processing plant, reports NBC News. The beheading of Colleen Hufford on Sept. 25 was "especially heinous, atrocious or cruel," Cleveland County District Attorney Greg Mashburn said in the filing. He added that "there exists a probability that the defendant will commit criminal acts of violence that would constitute a continuing threat to society."

Nolen, a convicted felon, faces a first-degree murder charge and two counts of assault for the stabbing rampage at Vaughan Foods in the Oklahoma City suburb of Moore. Authorities say he was on the warpath after getting suspended from his job at the plant. Earlier reports said he had been fired. The co-worker whom he allegedly stabbed, Traci Johnson, had earlier complained that she had an altercation with Nolen "about him not liking white people," Mashburn said. Nolen, who was injured by a plant executive's gun, was released from a hospital and transported to jail Wednesday.