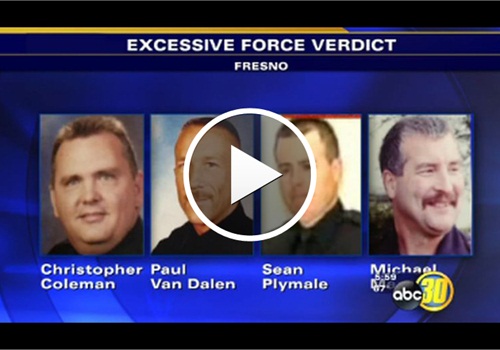 A verdict was reached on Wednesday in the excessive force trial of four current and former officers with the Fresno (Calif.) Police Department, reports ABC affiliate kfsn.

It was the second trial for the officers accused of police brutality.

Chris Coleman, Paul Van Dalen, Sean Plymale, and Mike Manfredi were found not guilty on seven of eight charges related to the very physical arrest of a domestic violence suspect in 2005.

After about a four-week trial -- and nearly two days of deliberations -- jurors said they're relieved to finally put this behind them. They came to a unanimous decision on all but one count -- an obstruction of justice charge for former Fresno police officer Christopher Coleman.

Read more about use of force California Officer Prosecuted

Mayor Keisha Lance Bottoms said 90 police recruits are currently in the pipeline, and that she is working with the City Council to enact a retention bonus for officers. The department is about 400 officers under its authorized level.

On Tuesday, city leaders heard from City Manager Spencer Cronk, who created a blueprint for restarting cadet classes. The blueprint lays out necessary changes that must be made before the academy starts, such as finalizing replacements for outdated and problematic training videos and bringing in a variety of community members to help teach courses.

Under the proposed legislation, in order to receive a permanent position as a law enforcement officer, probationary police officers must have a bachelor's degree with a major or a minor in social work.

The VR-DT was chosen in August 2020 by California POST following a competitive procurement process for its VR Force Options Simulator requirement. InVeris will deliver 50 systems during a six-month period as part of a $2.6 million contract award with the option for up to $5 million in additional systems and related equipment.