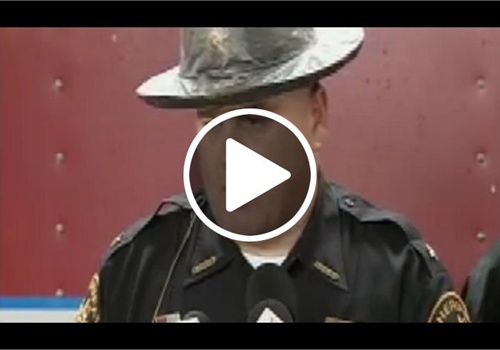 Muskingum County, Ohio, authorities have mostly contained an outbreak of wild animals near Zanesville where a suicidal man released a horde of Bengal tigers, grizzly bears, and wolves.

All but two of the animals had been recovered by Wednesday afternoon, after deputies used night-vision equipment to track and kill many of them late Tuesday. Among the 49 animals killed were 18 Bengal tigers.

Terry Thompson, the owner of an exotic animal farm, had released 56 exotic animals from their cages, and cut the wires so they couldn't be returned to the pens. Thompson was found dead on the property with an apparent self-inflicted wound.

Only a macaque monkey were unaccounted for by midday Wednesday, Muskingum County Sheriff Matt Lutz said at a press conference. The monkey poses a health risk because it's infected with herpes.

Deputies who arrived at Thompson's 46-acre property an hour before sundown on Tuesday began shooting the animals at the scene, which one neighbor said was "like a war zone." The neighbor also said he saw a tiger chasing a horse.

In one of his several press conferences in the past 24 hours, Sheriff Lutz described the initial scene at the property:

"As officers got out of their cruisers, there were animals running loose outside of the fenced areas. I had deputies who had to shoot animals with their sidearms at close range. That's how volatile this situation was. We are not talking about your normal everyday house cat or dog. These are 300-pound Bengal tigers that we have had to put down. We can not have these animals running loose in this county."

"The shooting of dozens of exotic animals in Zanesville is a tragic example of just how wrong things can go when people are allowed to keep wild animals," according to the PETA statement. "Keeping exotic animals is inhumane and unsafe for both animals and people, and it's time that Ohio did something about it."

Thompson had been released from prison on Sept. 30. He had pleaded guilty to possessing five fully automatic firearms, and was convicted of animal cruelty in 2005.

In April, an emergency order expired that had been issued by former Gov. Ted Strickland, prohibiting people convicted of animal cruelty from owning exotic animals.