The gunShot Box is an electronic gunfire simulation system that is remotely controlled to reproduce the sound of gunshots on command. It produces real explosions with safe levels of sound/percussion and does not use cartridges or speakers. That means no more slapping boards together or using the “fire” command to activate your trainees.

Here’s an example of how the gunShot Box can be used in an active shooterexercise.

Bang! Bang! Bang! The sounds of gunshots rang through the school halls as Deputy Brian relayed his position to dispatch and briskly entered the school’s main entrance. He passed several staff members crying out for help and one “teacher” who pointed him in the direction of the gunman as the sound of shots seemed to be bouncing around the hallway in different directions.

As he rounded a corner, he found himself looking down the blue barrel of a Simunition gun wielded by a role player. At the bad guy’s feet sat a gunShot Box, a .50 caliber ammo canister that was emitting electronically generated explosive bursts. Bryan’s heart raced as he successfully neutralized the “threat” and made his way back to the debriefing area.

That example comes from an active shooter training day at a Stanton, MI, elementary school. During the training, the Montcalm County Sheriff’s Office learned that coupling the realistic gunfire sounds of the gunShot Box with the agency’s force-on-force Simunition-style scenarios elevated the training to a new level.

For the Montcalm County SO, the gunShot Box solved four big issues. The clapping of boards together to simulate gunshots and the firing of the sub-sonic Simunition marking rounds was not realistic enough to make students hypervigilant. Role players in charge of firing starter pistols were often untimely with their “shots.” Blank rounds have become expensive and hard to find and their use requires ear protection during training scenarios. And finally reset time between scenarios was taking significantly longer due to reloading revolvers for firing the blanks.

The gunShot Box produces explosive noise without powder or combustibles. It achieves this effect by charging up a series of capacitors and creating a small arc between electrodes that ionizes the air just before the system releases a larger electrostatic discharge. The same phenomena creates the thunder of a lightning storm. In the gunShot Box the “thunder” is happening in six little heat-resistant chambers in a controlled and repeatable environment.

One of the first things we did after creating the system was to make a demo system with cutaway sides that allowed potential users to see the inside as the unit fires. Everyone assumes that it is a speaker and amplifier system making the noise until they see it operate and watch the “muzzle flash” and hear the crack. The 125-decibel blast wave can be felt by placing your hand even several feet above the unit, but it is safe enough that hearing protection isn’t needed for the trainees.

Product durability in training environments is critical, so we shock-mounted all of the electronic components (no mechanical/moving parts or relays) inside a heavy-duty sealed ammo can. For convenience we provided 14-foot power cords. The two units come protected in a rugged plastic padded case.

The training sergeant of the Montcalm County Sheriff’s Office is using the gunShot Box to take his agency’s training to a new level of realism, recently taking their teams through multiple scenarios in two days. The agency uses the technology to help its deputies rehearse reactions to gunfire in a way that will save lives.

That training is critically important. When a bad day occurs and a sheriff or chief is asked what they did to minimize or prevent an incident, he or she can pull out the training logs and scenario training plans and show the community that their agency put forth that extra training effort.

Montcalm County now owns two gunShot Box systems that can also be used for active shooter drills in their community by schools and the safety teams at houses of worship. School active shooter exercises like ALICE Training can be enhanced (without presenting firearms) using the gunShot Box. The realistic gunfire sounds can help prepare students to recognize “gunshots” and call out should they ever hear them in their school.

Setup is simple. Upon delivery to your agency, the gunShot Box is ready to go. All you have to do is plug in the 110-volt power cord, and flip the switch to “On.” When the power-up light indicates the unit is ready, open the lid and press the wireless remote to activate a shot or a sequence of shots.

If you are training in a remote location, you can use a generator to provide power to the gunShot Box. As an alternative, you can connect the unit to a battery/inverter pack.

GunShot Box is assembled in rural Michigan by a team of veterans, farmers, and first responders. The units have been running in law enforcement training for the last two years throughout the Midwest. Those first prototypes are still running strong. Scenario Trainer provides a two-year warranty with the “Hot Swap” program. This means if an agency has a unit go down, we send out a replacement immediately.
The training package from Scenario Trainer includes a rugged plastic case and two gunShot Box units. It sells for $1,388 and is available at www.scenariotrainer.com.

For all POLICE Magazine subscribers, if you use the code POLICEMAG, you will receive two extra remotes with your purchase (a $90 value) valid for the next 30 days.

Tim Richardson is the product innovator and founder of Scenario Training Inc. He developed the gunShot Box after his daughter escaped a mall shooting and a second incident in a classroom with an armed student.

Read more about What Does My Tech Do?

NYPD Criticized Over Use of Robot Dog

State Sen. Brad Hoylman, who represents the district where this incident took place, thought deploying the $74,000 robot dog anywhere undermined police-community relations, but especially in a public housing complex where residents might already mistrust the police. 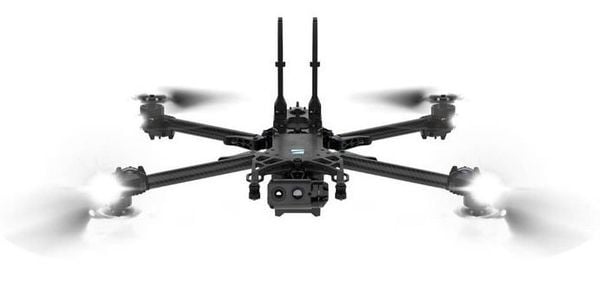