Thanks to recent advancements in artificial intelligence, the new Ambassador interpreter from Waverly Labs can "understand" 20 different languages and translate them back and forth so that an officer can converse with people who have multiple different native tongues in near real time.

"There are translation apps out there, but they don't facilitate conversations," says Waverly Labs CEO Andrew Ochoa. "We're it."

The Ambassador interpreter is much more than just an app. It is an over-the-ear speaker device that also contains multiple directional microphones. It works by connecting to an app on a registered user's smartphone via Bluetooth, so it mostly just requires that the phone being used be within close proximity of the people speaking into and listening to the devices.

Say you're an officer who speaks English taking a statement from a Spanish-speaking witness. You're each wearing an Ambassador interpreter over one ear. When the witness speaks, Ochoa says the device "sends that speech signal to our cloud-based translation system, where it transcribes and translates and resynthesizes the foreign language into your native language, which is then heard in your Ambassador device."

One officer can speak with up to three other people to include a total of four different languages if needed. Usually, the officer would wear one Ambassador interpreter over his or her ear and give a second one to the other person to wear over their ear, so both can speak in their own language, and hear the other person's speech in their own native language. Audio and visual notifications let both parties know their speech is being captured.

The best option is for the officer to select and set the language to be translated in the app itself before the conversation starts, says Ochoa. There are currently 20 languages to choose from. This selection is typically done as the officer is pairing the over-the-ear devices to the phone and setting up a connection so they are ready to be used.

But sometimes the officer might not recognize the language the other person is speaking. For those situations, Waverly Labs is developing automatic language detection to take the guesswork out of language selection.

Another option is for only the officer to wear an Ambassador device over the ear to understand what's being said to them in a different language. "But then the other person wouldn't know what's being said back to them," Ochoa points out.

However the device is set up, as each person hears the translated speech, a transcript of it appears on the paired smartphone to create a full transcript of the conversation between all parties involved. "The translation is very accurate," says Ochoa. "It does make mistakes, but one of the benefits of having the transcript on the phone is you can check it."

The device has a push button function so the officer can pause the translation or the recording if needed. It also allows the officer to set up and pair the device ahead of time and then simply push the button to activate it when ready to start a conversation.

Waverly Labs takes care of storing the audio and transcription data on their end, so agencies don't need to worry about housing it themselves. While the final details have not yet been worked out, Ochoa says each officer will have access to data from their own account, and administrators will have access to all accounts registered with the agency.

Learn more about how technology is evolving to make large-scale events safer. 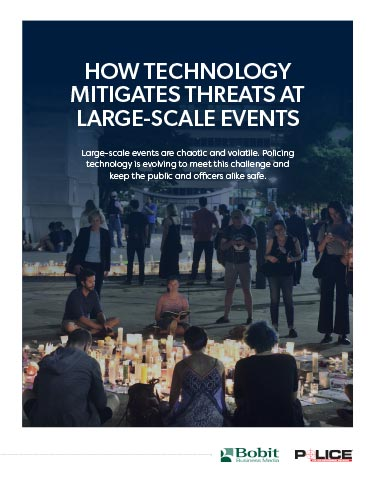 The units are expected to begin shipping in November. The price for preorders is $109 and retail is $149, with special pricing available for law enforcement agencies. Waverly Labs is still looking for departments that are interested in beta testing the Ambassador interpreter in the coming months. "The more feedback we can get on it, the better we can make the product," says Ochoa. Interested agencies can email [email protected].

"We want to make the job easier for police departments who have difficulty communicating with people in the community who don't speak the same language," says Ochoa. "We want to empower police departments to bridge that language gap with their communities and create a greater environment of trust and cooperation."