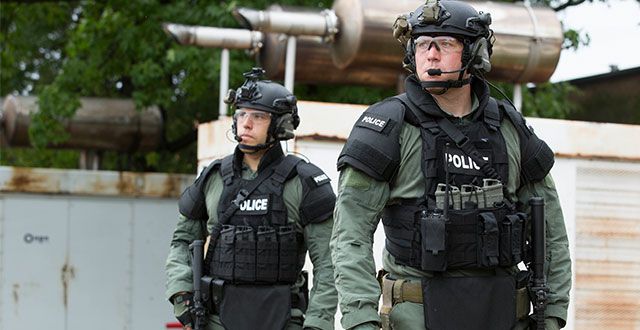 Throughout the centuries, soldiers and warriors have looked for better and better ways to fend off attacks and keep themselves safe from deadly weapons. From knights in shining armor to Japanese Shogun warriors, personal protection has always been a priority of those going into battle. Leather, chainmail and steel were the primary materials in armor, with conventional thinking falling on the idea that the harder the material the better the protection. Swords and knives were the most common weapon of choice.

Now that bladed combat is no longer as common today and bullets are the biggest threat, all those heavy, rigid, and bulky materials have been replaced with much lighter-weight synthetic fibers that can be sewn together into ballistic vests designed to be hidden under clothing or even made into the clothing itself, such as a windbreaker or a pair of pants. Erroneously called “bulletproof vests” when they first emerged, ballistic armor is really only bullet-resistant. Even the best body armor can be penetrated with a powerful enough bullet or repeated shots. It’s not indestructible.

But how much force does it take to stop a bullet, and how exactly does body armor work?

The interior of the armor is where the bullet stopping takes place. The outside carrier is mostly decorative, designed to either match a uniform or be neutral enough to go with anything. However, the inside consists of two different materials that work together to create the true stopping power of the vest.

Choosing the Right One

There are two basic categories of body armor: concealable and tactical. Which level is right for you? That depends on the situation. Types I through III-A are the most common levels worn by police officers during everyday patrol, as most of the armed criminals they are likely to encounter will carry small-to-medium caliber handguns. These vests tend to have the slimmest profiles, allowing for easy concealment under a uniform shirt or inside a uniform-matching outside carrier.

Type III and IV are often reserved for tactical/SWAT teams who are likely to face .223, .308, and other high-velocity rifle rounds. These vests are designed to be worn over a uniform or thrown on atop concealed armor at a moment’s notice, especially for first responders to a high-risk incident.

How do you know what type of armor will suit your needs? The National Institute of Justice (NIJ) sets the standards for body armor manufacturers, broken down by six protection levels:

Bullets don’t bounce off body armor, of course. That would be extremely dangerous, as the bullet could ricochet off the vest and hit innocent bystanders. The vest itself would also be extremely heavy and cumbersome and therefore impractical for everyday use. Instead, today’s armor catches the projectile inside a tight weave of synthetic yarn known as para-aramid thread, a material that by itself is not strong enough to stop a bullet but gains tremendous grabbing power when woven into tight layers. The most widely-recognized brand of bullet-stopping para-aramid thread is Kevlar® by DuPont. However, many other manufacturers now make similar products that are used in armor around the world.

In addition to para-aramid weave, laminates such as ultra-high molecular weight polyethylene (UHMWPE) also make great bullet-stopping materials. Dyneema® is one brand of UHMWPE that is commonly found in ballistic armor because it is incredibly strong – up to 15 times stronger than steel, in application – extremely durable and up to 40% lighter-weight than para-aramids.

While soft body armor with para-aramid thread is designed primarily to prevent penetration from handgun bullets, such as 9mm, .40, and .357, for example, sometimes additional protection is needed in high-risk situations. That’s where a second component in the bullet-stopping world comes into play. Typically made from metallic or ceramic materials, ballistic plates (also called trauma plates) can be inserted into the front and back of a vest to add a second layer of protection to stop higher-velocity rounds, such as those fired from a rifle or certain higher-powered handguns.

While bullets are now the primary threat to armor wearers, sometimes they do still face edged weapons. Today, the NIJ rates armor not just for ballistic stopping power but also its ability to protect against blades. Stab resistance is broken down into “edged blade” and “spike” designations. Certain body armor is an excellent barrier for knife attacks. Level 1 and Level 2 protection are typically found on concealable bests while Level 3 is more commonly found in external vests. Propper currently provides Level 1 and Level 2 “spike” certified packages and is working on a Level 3 option.

For body armor to perform the most effectively, it must cover the wearer’s vital organs and other important areas, so it needs to fit properly. There are two basic designs for body armor: 2-panel “clamshell” and 4-panel wraparound. The 2-panel configuration offers good front and back protection but can be a bit uncomfortable and doesn’t provide the same level of side intrusion protection as a 4-panel design, which includes dedicated side panels that work independently from the front and back and reduce the potential gap between the front and back of a 2-panel vest. Every person is slightly different in height and girth, so to assure the maximum protection and to make it as comfortable as possible to wear, each vest should be custom fit to the individual wearer. Men and women have different fit needs, as well.

Whichever body armor you choose, make sure it is appropriate for the level of protection you need and that it fits right.