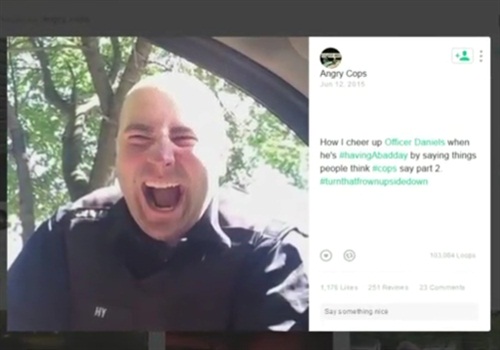 A three-year veteran of the Buffalo (NY) Police Department assigned to the Housing Unit was suspended without pay Monday afternoon for violating the department's social media policy, reports WIVB.

For many months he's been doing seven-second skits under the name of Angry Cops, appearing on social media site Vine. In one such post, he appears in a Santa hat and what appears to be his Buffalo Police jacket singing, "Dashing your parole, with a one gun crack arrest, throw you in a cell."

Buffalo Police have a strict policy which reads that officers can be on social media, but not in uniform and not representing themselves as officers. You can see the officer's name tag in some of these videos and his badge. The policy also says you can't dishonor the position of officer on social media.

Sources tell News 4 the officer has been warned before about his use of social media, and the Department isn't amused to see him appear in a police station pretending to ingest cocaine from the evidence locker.

Since the first story aired, friends of the officer called WIVB to say he was not wearing a real Buffalo uniform or badge, but that didn't seem to matter to the department. The officer said he's not allowed to comment.

Two other police officers who also post videos like this called to explain that they do it to show that cops aren't robots, that they have a tough job and sometimes need to vent.