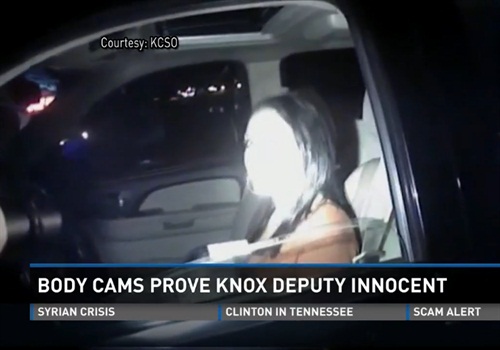 A Knox County, TN, deputy's body camera helped prove his innocence after he was accused of fondling a woman during a traffic stop, reports WBIR.

On Nov. 8, a KCSO deputy pulled over Margaret Ellen McElhinny under suspicion of driving under the influence.

Three other deputies came to the scene. During the stop, they began to question her.

McElhinny later accused one deputy of fondling her once she left her car for a sobriety check. Three of the four deputies wore body cameras, including the one she accused.

Investigators reviewed the recordings from the body cameras and found the deputy in question did nothing wrong.

McElhinny was arrested and faces multiple charges, including DUI, criminal impersonation, and false reports. During the traffic stop, she also lied about her name.

"This officer was accused of a class B felony. She was looking to take his freedom. 8 to 12 years in the penitentiary. Losing his family, his integrity. His character would have been questioned a thousand different ways," said KCSO Chief of Administration Lee Tramel.