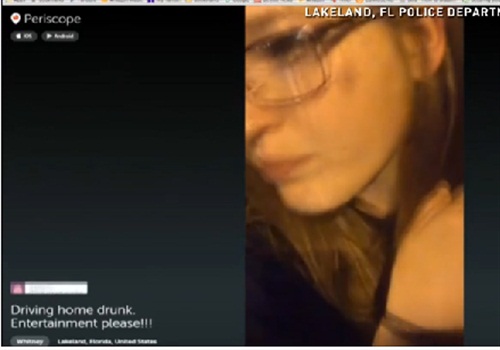 A Florida woman used a live streaming app on her phone to record herself while drunk driving on Saturday, according to police, reports USA Today.

Lakeland police received 911 calls about a possible drunk driver who was using the social media app Periscope to broadcast her illegal joy ride to the masses on Saturday.

"You hear her saying she's drunk," said Sgt. Gary Gross, Lakeland Police spokesman. "I got to tell you I was a little shocked. After 30 years of law enforcement I hadn't seen anything like this before."

As a result of the video being streamed worldwide, numerous messages on the app and personal text messages were sent to the driver asking her to stop driving before she killed someone or herself.

The female driver, identified as Whitney Beall, 23, repeatedly said she was "drunk," and that she had a flat tire. Beall said several times that she was unaware of where she was.

One officer took the initiative to download Periscope and open up a personal account in an effort to locate the driver. Officers were then able to pinpoint landmarks in the area from the streaming video and located Beall. She was arrested and charged with DUI.

The incident has sparked LPD to train their officers on how to use Periscope and emerging technology, so they'll be ready when something else like this occurs.