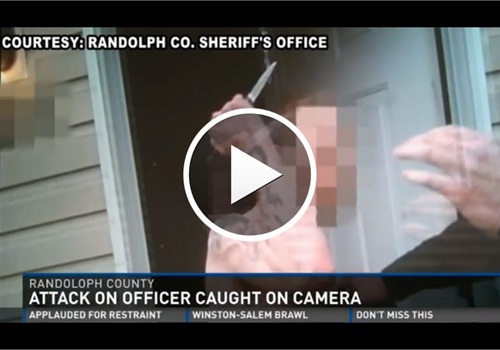 A video recorded by a Randolph County (N.C.) Sheriff's deputy's body camera shows that a man attacked a deputy with a knife back in December.

Two deputies responded to a call from a concerned family member and in seconds that simple call turned violent. The suspect walks out of the home and stabs one of the deputies. Luckily, the deputy's vest stopped the knife.

"It's beautiful evidence. When you can show a jury or a judge exactly what happened at the scene and what the officer was faced with and why he chose whatever course of action he chose, a picture's worth a thousand words," said Sgt. Bernie Maness with the Randolph County Sheriff's Office.

"To see it, you realize the guy's intent was to harm this officer. And to stab him in the upper chest with a knife is pretty serious attempted injury," Sgt. Maness said.

Ironically, the sheriff's office is only testing two body cameras and one caught the attack on video.

The sheriff's office hopes to know what body cameras it would buy and the cost by this summer.

Sgt. Maness said they are not releasing the suspect's name or mugshot at this time. However, he did say the suspect was charged with assault with a deadly weapon with intent to kill, which is a felony.