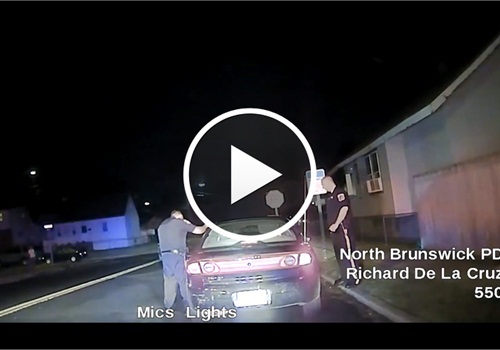 During the traffic stop, officers broke out the passenger side window of Cephas' car and pulled him physically from the vehicle. Cephas contacted local and national media and, because this was shortly after the shooting of Michael Brown, the media pounced on the story.

The reporters contacted both Cephas and the North Brunswick PD.

Cephas recorded his encounter with De La Cruz and other officers.

So did De La Cruz.

The officer's squad car had recently been outfitted with a WatchGuard Video system that started recording when the officer activated the car's emergency lights to pull over Cephas.

The official video shows Officer De La Cruz dealing with an uncooperative Cephas who will not roll down the windows of his car and has locked himself in the vehicle.

After watching the official video, the reporters decided Cephas' claim of police brutality did not hold up.

"The video in this incident saved a lot of headaches for the department as well as Officer De La Cruz," says Capt. Brian Hoiberg of the North Brunswick PD.

Cephas was charged with driving under the influence and resisting arrest. Marijuana was reportedly found in his car.