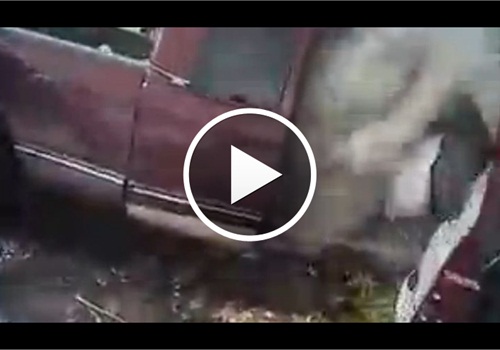 Three officers from a Cleveland-area police department rescued the driver of a truck who struck a utility pole Saturday morning.

Euclid (Ohio) Police Officer Adam Beese was wearing a TASER Axon on-officer camera system during the incident, which began at about 11 a.m. As Officer Beese approached the truck, flames from the engine compartment licked the crunched hood of the burgundy pickup.

The raw footage, posted by WKYC, shows the passenger-side window shatter and a cloud of brownish-gray smoke pour from the driver's compartment. Two other officers used batons to break out other windows and pull the man to safety.

"It's your friend," Beese said about the system. "It's there to assist in convictions and reduce false complaints."

Several veteran commanders have resisted its use in the agency, and Beese said he has had to change the status-quo mentality.

"You've got to get the mentality that 'I'm already on video,' because everybody on the street has a video camera, so you might as well have video that's as close to what you're seeing as possible," he said.