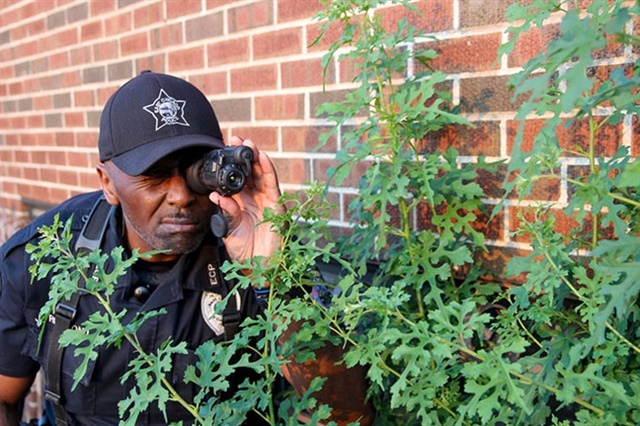 As I snapped another picture, my “model” casually mentioned that our photo backdrop was the scene of a double homicide a couple years ago. Nearby, a few “kids” from the block—some of whom appeared to be in their mid-40’s and malevolent—were interested in what we were doing. Focused on the camera, I didn’t mind the sweat caused by my bulletproof vest and was thankful for the two other police officers watching our back. It’s a tough street in a tough city.

We were standing in the North Harbor neighborhood of East Chicago, Indiana.

If you haven’t heard of EC, you probably have heard about the city next door; Gary, Indiana is the occasional murder capital of the U.S and a very sharing neighbor. With Gary to the south and east, one of the biggest steel mills in the world to the north, the south side of Chicago to the west, refineries, smelting plants, harbors, more miles of railroad than street, a legacy of environmental problems and a history as a melting-pot city in a region originally made up of immigrants, East Chicago isn’t the easiest place to be a cop. That’s why we took the new FLIR Breach® PTQ136 multifunctional thermal imaging monocular to the streets with the East Chicago Police Department—to show them the many ways FLIR Breach can make their jobs both easier and safer.

Our host for the hot, busy July evening was patrolman John Richmond and his partner Joe Kelnhofer. A 14-year veteran of ECPD, Richmond grew up in a tough section of East Chicago just across the tracks from the steel mill. He works those same streets today, much to the aggravation of lawbreakers who think they can buffalo a man who knows multiple generations of residents. Kelnhofer just completed his first year on the force.

When asked to describe the overall policing situation in the community, Richmond thought for a moment and observed, “We’re a small town with big city problems.”

East Chicago is relatively small in both area and population. The city footprint is 16 square miles, but two of those are harbor and waterway and numerous other acres are occupied by industrial land, railroads and the cattail swamps along the Grand Calumet River and Lake Michigan. That means the city’s 30,000 inhabitants are densely packed into only ten neighborhoods.

Those neighborhoods run the gamut, making East Chicago a city of great contrast. There are 1950’s and 60’s public housing projects sprinkled through areas that could otherwise pass for old working-class historical neighborhoods in major cities. Some other sections give off a country club-like vibe, looking much like middle-manager suburban subdivisions. Mix in countless factories that range from “well-used” to whatever classification lies beyond “post-apocalyptic,” and you have an urban landscape that is both fascinating and challenging.

The city is approximately half Latino and 30-percent African-American, while the remainder is a mix of Polish, German, Serbian and other ethnic backgrounds. Fortunately, racial tension isn’t a huge problem for the city or its police force. That’s a good thing because drugs and gangs—often transplants from nearby Chicago and Gary—bring plenty of trouble to the community.

In fact, during the 1990’s when murder rates were significantly higher, the county’s prosecuting attorney declared that Guthrie Street in East Chicago was even more dangerous than any of the more notorious trouble spots in nearby Gary.

At 9 p.m. on a sultry night when Lake Michigan breezes only added humidity to the full-moon heat, we cruised by one dimly lit local park that was full of people loitering in the dark. Richmond sourly noted, “We could probably make some arrests right here, right now.”

It was a perfect place to press the FLIR Breach into duty. 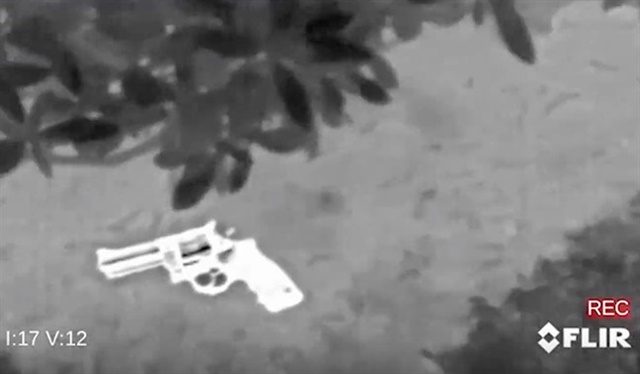 At only 210 grams, FLIR Breach adds minimal weight to an officer’s otherwise heavy gear. It can be concealed in a pocket or be mounted to a helmet with its mini-rail feature.

We pulled over and I handed the thermal monocular to Richmond. He discretely brought it to his face while looking out the open driver’s-side window of his unmarked SUV. “Wow,” was the initial response, followed by, “that’s really cool.”

Another “wow” was repeated more softly and then, “I can clearly see what everybody is doing.” The officer was awed. He handed the FLIR Breach to his partner, who offered the same reaction before refusing to hand the unit back.

We got out of the vehicle, and Richmond approached several shadowy figures hanging out under a shelter. A few of the men stayed put, offering desultory greetings to the officers, while several others sidled away into the darkness.

They didn’t realize that Kelnhofer was watching everything they were doing through the FLIR Breach. Even through the darkness, Kelnhofer could easily see if the men were dropping drugs or drug paraphernalia into the grass or hiding a gun as they walked away.

Kelnhofer liked the idea that he could record over 1,000 still images or 2.5 hours of video of the scene with the push of a button. “That would be really handy in court,” he pointed out while watching some of the men enter a vehicle with Illinois plates.

On this occasion, Kelnhofer didn’t see anything actionable, though we did check out several locations where the men had lingered while walking away. As we looked around a spruce tree where one of the group had paused, Kelnhofer noted that if the man had dropped a handgun into the shrubbery it would have been easy to locate due to transferred body heat emitting from the firearm. Tonight, however, there was nothing.

Between calls for service and one arrest, the remainder of our night on patrol in EC was spent cruising the streets and alleys looking for suspicious activity. In one instance, we parked on an unlit street corner and conducted a short observation of a known group of troublemakers goofing off in front of a house.

Nearby, another group of residents was sitting in the dark on a doorstep. Richmond engaged them in some friendly conversation. After a few minutes, he allowed them a brief view through the Breach. They were shocked at the ease in which it could quickly and clearly identify people—especially in the Outdoor Alert color palette, which highlights the warmest parts of the scene in orange. “You can’t hide from that thing,” one of the men said with a note of pain in his voice.

While driving away, Richmond laughed and offered that someone in the group had likely already called their friends down the street and warned them that the police were now equipped (in the words of the resident) with “some kind of Star Wars (expletive deleted).” 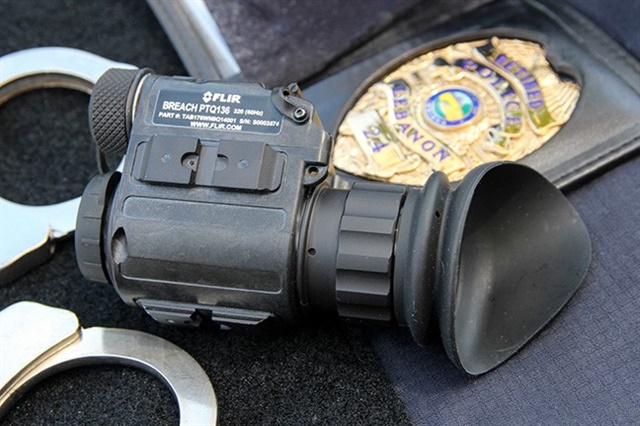 The Day is Done

As we stood talking in the police department parking lot after the shift, Richmond was enthusiastic about the wide variety of uses FLIR Beach holds for officers. “It’s a great tool,” he said, unsure where to begin on the list. “It would be very handy out here (in East Chicago) on patrol, and our gang and narc (narcotics unit) guys would love to have this because of its small size,” Richmond noted.

“It would be great to sit in a UC (Undercover) vehicle and look out for people while remaining undetected and still maintaining your peripheral vision,” Richmond mused. “You can also pick out heat signatures from vehicles and know if they’ve been running or sitting,” he added, observing that as the Illinois vehicle at the park drove away, it had clearly visible warm spots on the tires where they had been resting on the pavement.

Kelnhofer was equally impressed. “I liked it a lot!” he said enthusiastically. “It’s definitely needed for law enforcement, but I’d also use it for hunting—especially to help find downed deer. It’s a great all-around-awesome product.”

All told, nearly a dozen officers on the ECPD got a chance to handle the Breach during the afternoon and evening ride-along. All were similarly impressed with the compactness, image quality and sheer usefulness of the tiny thermal monocular. They definitely saw its potential as a great new tool that could help the officers become more effective and much safer on the challenging streets of America’s “small town with big city problems.”

For more information on the new FLIR Breach, as well as other thermal and night vision products for law enforcement, visit flir.com.