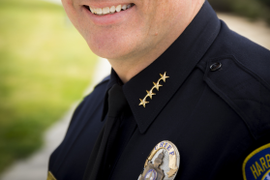 Strengthening the Chain of Command

Unlike in the military, LEOs often need reminders to communicate with their supervisors and subordinates to work as a well-oiled team.

Lonely, But Not Alone

Probably the biggest mistake that leaders make is not properly using the other leadership resources at their disposal. We have a chain of command in law enforcement for a reason.

The "Moto" and How to Get It

A recent e-mail from a reader asked me how a leader brings out the highest levels of motivation from police officers. It seems like a great topic to write about.

Back to the Basics

"Let us stop being selfish&hellip;to the ideas of the common good and of our existence, everything must be sacrificed." &mdash;General Jose de San Martin

"The important thing to recognize is that it takes a team, and the team ought to get credit for the wins and the losses." - Philip Caldwell

On Leading Cops and Two-Year-Olds

Most of us are leaders in some facet of our lives. Any police officer who doesn't think of himself or herself as a leader is just plain wrong. I doubt that a cop who is also a parent could argue being a parent isn't about leadership, because it most certainly is.

To Lead and Serve

"The Leader must himself believe that willing obedience beats forced obedience, and that he can get this only by really knowing what should be done." - Xenophon, 360 BC

Leadership on a (Time) Budget

"Time is neutral, but it can be made the ally of those who will seize it and use it to the full." &mdash; Sir Winston Churchill

"Laughter gives us distance. It allows us to step back from an event, deal with it, and then move on." &mdash; Bob Newhart

Can Leadership and Friendship Co-Exist?

You can't call a relationship "friendship" until it has gone through adversity and you know that the person is really your friend. That can also be applied to leadership.

Preparing for the "Big One"

Only you know your leadership situation. Whether you are the chief of police or an officer on the beat, you should know your area of responsibility and what is required of you when the "big one" hits, whatever that catastrophe may be.

Leadership Q and A

Sgt. Mark Stainbrook was recently interviewed by a fellow officer. Here he shares his answers to questions about leadership.

Leading in Times of Doubt

"It is hard to lead a cavalry charge if you think you look funny on a horse." - Adlai Stevenson

The Future of Law Enforcement Leadership

"In a time of drastic change it is the learners who inherit the future." &ndash; Eric Hoffer