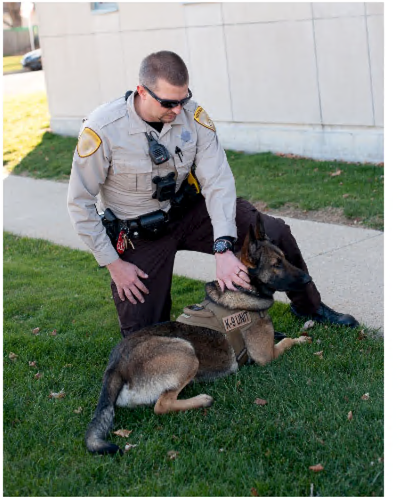 His newest assignment, as K-9 handler, partners him with Ruben, a 2-year-old German Shepard/Belgian Malinois mix.

The department tasks the K-9 team with duties that range from tracking missing persons to narcotics searches and building sweeps. The tasks can expose the pair to gases, explosives, chemicals, blood-borne pathogens, inclement weather, and dirt and debris. When not on a call, VandeZande conducts ongoing training with Ruben to keep him at the top of his game.

As his assignments vary, one thing remains a constant—VandeZande’s need for quality equipment. Whether it’s a gun, a flashlight, or a watch, the equipment he uses must keep working no matter the situation. 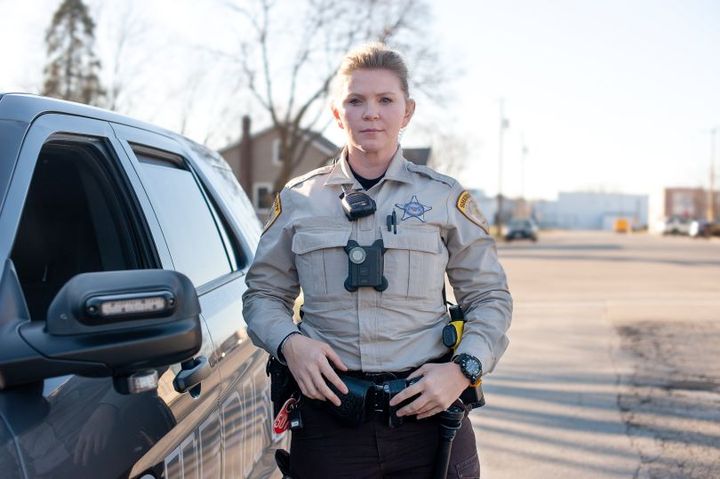 Deputy Alison Walker also needs her equipment—down to the watch on her wrist—to hold up in rain, sleet, snow, and harsh impacts.

Walker has worked at the Jefferson County agency for nearly as long as VandeZande; just shy of 10 years. She worked as a Field Training Officer in the jail division and was a member of the dive recovery team for five years. Today, she’s assigned to patrol, where she is a member of the Crash Investigation Team, Boat Patrol, and at times, Snowmobile Patrol. In these roles, she never knows whether the day will find her writing a ticket at the side of a highway, investigating a fatal crash, or patrolling by boat or snowmobile. 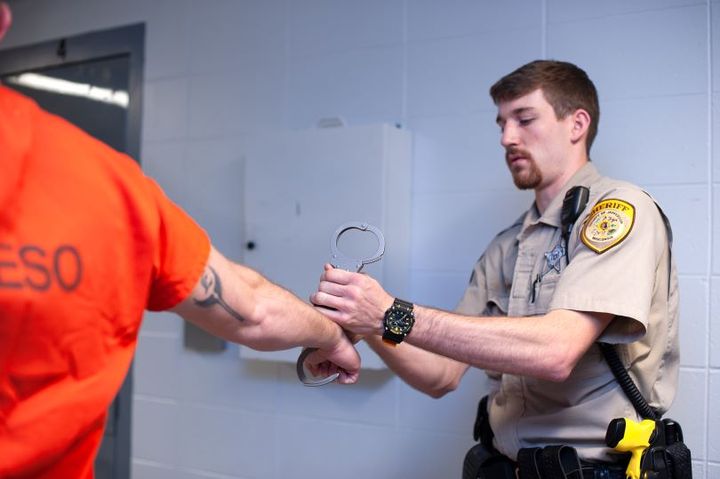 Deputy Logan Dahnert has held his role in Jefferson County’s jail division for 2 ½ years. He remarks that though weather is not a factor inside the jail, he still needs hardy tools that hold up to dirt, debris, and harsh impacts. “Equipment gets dinged up and breaks easily in the jail,” he says. Impacts during cell extractions or use-of-force situations can damage officer’s tools.

In another state and another role, Det. Sgt. Austen George works in the Scottsdale (Arizona) Police Department’s investigations unit and as a SWAT team leader. George requires reliable equipment on duty; any equipment failure affects his safety and that of the team he leads.

Four law enforcement leaders who hold four different jobs. But each one puts the same demands on their equipment. Their tools of the trade must be tough, rugged, weatherproof, shock proof, and made to last.

G-SHOCK understands that no matter the assignment, every officer requires a dependable timepiece. The G-SHOCK lineup includes the GA900 and GRB200 timepieces. Both are heavy-duty timepieces packed with features and made to hold up in the toughest environments. 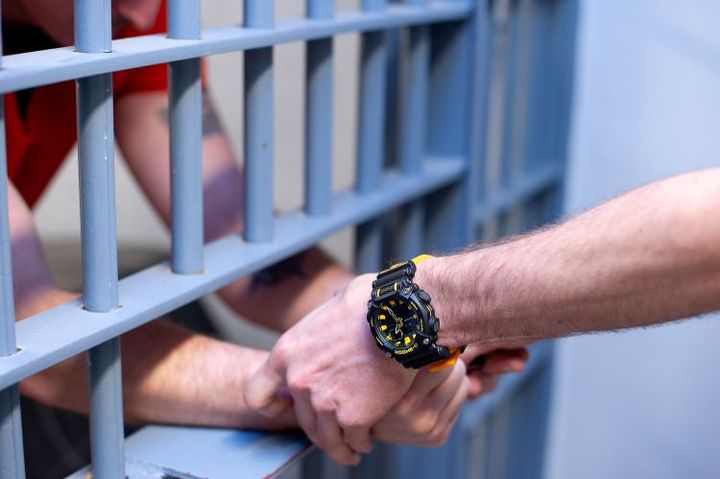 The Jefferson County Jail has an average daily population of 180 inmates, serving time or awaiting trial for offenses that range from criminal damage to property and disorderly conduct to battery, sexual assault, and homicide.

As one of 32 jail deputies, Dep. Dahnert relies on a watch for every task, which varies from day to day. He explains: “My daily tasks are always up in the air. I never truly know what I am going to be getting myself into. It could be a few simple bookings or multiple use-of-force situations in one day. And I always check my watch to make sure I am doing things on time and by the book.”

As a Field Training Officer, Dahnert repeatedly checks his watch to document everything his trainee does. “I couldn’t even tell you how many times I look at my watch every day. It is that much!” he says.

When buying equipment, Dahnert seeks durable tools. “I look for something that I only have to buy once, in the hopes that it will last,” he says.

Though Dahnert deems his watch an essential piece of equipment, until recently he always purchased the most affordable watch available. He didn’t see the point in spending a ton of money on a watch that would last — because of the wear and tear of his job — less than a year.

He’s changed his tune since using the G-SHOCK. “The durability and strength of the G-SHOCK GA900 is unmatched,” he says.

G-SHOCK designed the GA900 as a heavy-duty watch with a dash of street flair thrown in. Though Dahnert appreciates the watch’s many features, he also loves its design. The striking watch has an industrial look with a yellow resin band and black face with easy-to-see digital display. A 10-sided bezel secured by four screws and checkered surfaces give the watch a tactical appearance.

“This watch looks very sharp while still offering many great tools, which are all held on my wrist,” he says. “I must have things that are accessible and easy to use when I need them. This watch gives me these tools at the push of a button.”

Deputies walk through the jail and perform inmate counts and safety checks every hour. They must complete their inspections correctly and on time and log their findings.

Dahnert uses the GA900’s 1/100-second stopwatch, countdown timer, daily alarms, and time functions more than anything. Alarms ensure regular safety checks while the timer and stopwatch help him with training. “If I am timing my trainee to see how fast he can put on an MSA in case of fire, I can have him prepped for that and give him by-the-second feedback,” he says. “The timer allows me to make sure I am doing every walk through on time, by the hour.”

The GA900 resists shock and its mineral glass resists scratching, which is important to Dahnert because of the abuse his watch takes on the job. “I can’t tell you how many times in the past that my watch would catch on a door or hit a wall, and I’d have to pick it up off the ground,” he says. “The GA900 hits the wall and doesn’t even get a scratch. And, I have no fear of it breaking or falling off when I’m tussling with someone.” 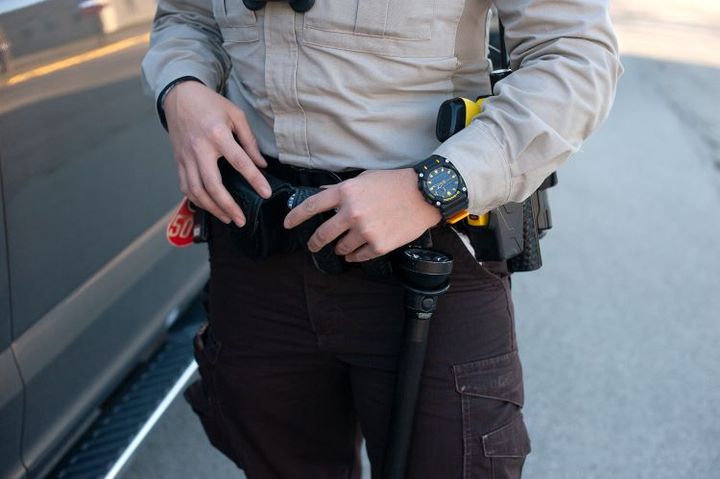 The Jefferson County Patrol Division oversees a population of more than 83,000 people over 583 square miles. Deputies patrol their assigned areas to prevent illegal activity and ensure the safety of citizens. During their shifts, they may direct traffic, write tickets, investigate crimes, and respond to calls for help.

As one of the 34 deputies on patrol, Dep. Walker relies on her watch for every call and in every season. In Wisconsin, Walker may find herself stopping traffic in sleet or snow, bitter cold, rainy weather, or extreme heat. “My watch needs to stand up to these conditions,” she says. Here, she says the G-SHOCK GA900’s water and shock resistance are a definite plus as is its LED light, which allows her to check her watch in dimly lit conditions.

“I work most of my shifts in the dark, and the LED light is a necessity,” she says. “The LED is bright, and you can adjust the setting to what works best for you.”

Walker uses her watch for field sobriety tests when she stops someone suspected of operating a motor vehicle while intoxicated or under the influence of other drugs. She sets the countdown timer for 30 seconds during the one-leg stand test, where she asks the driver to stand with one foot about six inches off the ground and count for 30 seconds.

“The time needs to be accurate,” she says. “It helps us determine how impaired they are and what drug they might be on.”

She remarks that the G-SHOCK watch is nicer than the ones she usually purchases for duty. But Walker says she won’t settle for less now that she has one. “I use this watch on and off duty,” she says.

The avid deer hunter reports even after a walk through the woods with the GA900 scratching against brush, the watch remained scratch free. “I can’t say the same with lower-end watches,” she says. “You never know what you will get into when tracking a deer through cattails and walking in water. You need a tough watch in those conditions.”

In situations where lives are at risk, officers need reliable equipment. George doesn’t skimp on any equipment, even his watch. “I’ve had my original G-SHOCK watch for 16 years, and it’s taken several lifetimes’ worth of abuse. It still works and has zero damage,” he says of his older timepiece.

He recently upgraded to the GRB200, which packs mission-critical functions into the toughest of watches. He says: “I know this watch will last a very long time. As far as tool watches go, the G-SHOCK line can’t be beat for durability and value.”

The GRB200’s high-strength weather-resistant carbon core guard structure protects the module with a resin case reinforced with carbon fibers. Its rugged construction resists shock, vibration, and water while its mineral glass resists scratches. The watch bezel comprises three layers of resin with carbon-fiber inserts and a semi-transparent top layer to reveal the carbon material inside.

G-SHOCK arranges the buttons that operate the watch in a way that makes them easy to manipulate, even with gloves. “The LED lights up the watch face well, and the button is super easy to use,” he says.

George lauds the watch for its sleek design. “I am a huge fan of the design of most G-SHOCK watches and this one is no exception,” he says.

The GRB200 features a thermometer, altimeter/barometer, digital compass, and calorie and step counter. George finds the calorie and step features among the most useful. “Fitness is an area most LEOs struggle with and anything that can help us monitor that is a bonus,” he says. “Even for the average patrol cop, having the encouragement to get out of the car and walk around occasionally is a good thing. In a tactical team environment, being able to track distances comes in handy in an open field environment or hike.”

The Bluetooth smartphone link connects the watch to an app that tracks the data it collects. “I use the app to track my steps and used it to set up the watch,” he adds. “It connected with no issues, and the step counter seems pretty accurate. The app itself is simple and intuitive.” 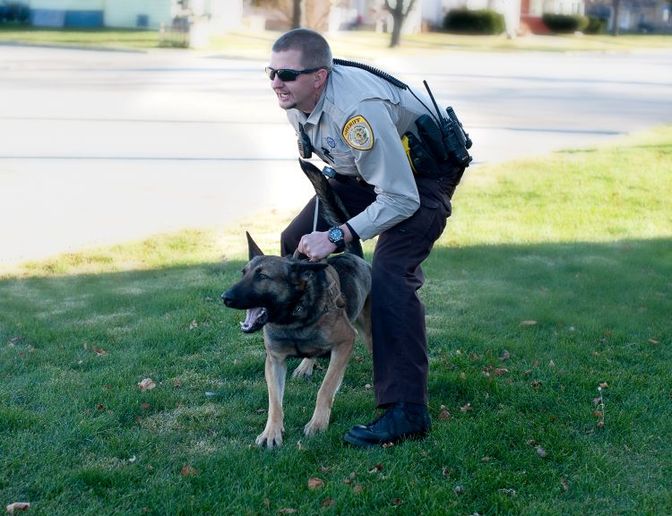 As one of the three K-9 handlers, Dep. VandeZande uses his watch on the job every day, whether he’s at a call or training Ruben during his downtime.

He explains he needs a watch with advanced capabilities to help him collect the data he needs. He notes the compass, altitude/barometer, and temperature measurement capabilities are handy for track and sniffs.

The digital compass measures and displays direction as one of 16 points, which gives a very precise measure for training and tracking purposes. “We always know the direction we are heading in as degrees from North,” he says.

Like George, VandeZande relies on the step counter to monitor his steps and improve his personal health. He uses the G-SHOCK phone app to collect and store the information he needs on the job and for personal use.

“The app makes the watch easy to set up and use. All I have to do is connect it to my phone,” he says. “It’s easy to set up, and it sends me information throughout the day.”

Every law enforcement officer needs a quality timepiece that is durable, rugged, and reliable. The G-SHOCK lineup covers every assignment and every task with the GRB200 and the GA900.