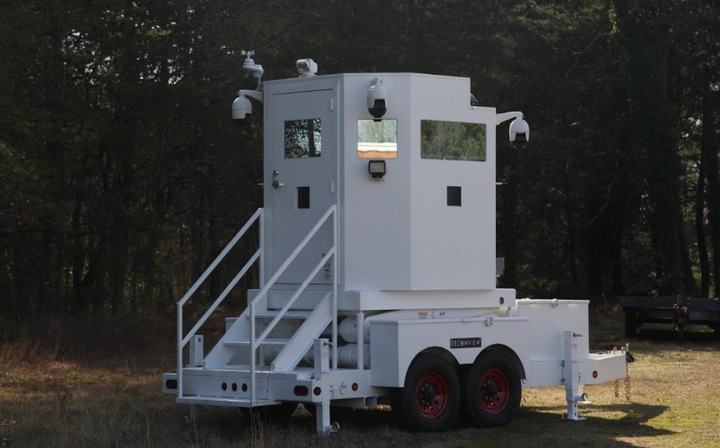 Domestic and international municipalities, law enforcement agencies, the military, prisons, airport, ports, amusement parks, large commercial businesses, sports teams – these and others who seek to safeguard large crowds of any nature can benefit from the Guardian Tower. A football game at your city’s stadium, a shopping mall parking lot plagued by vehicle break-ins and assaults at the holidays, a political demonstration, border security – all demand the utmost vigilance to protect participants and bystanders. Other customers have found creative uses you probably hadn’t thought of, for example: Oil field operators and marijuana farmers seeking to safeguard their wares. A high-risk intersection prone to speeders and wrecks. Security workers needing to secure large areas after a natural or manmade disaster.

Bullet-resistant towers are very rare in the industry. What makes the Guardian Tower unique and especially valuable is its standard heavy-duty scissor lift, which allows personnel to go up and down at the flip of a switch. The Guardian Tower can be towed behind a vehicle and set up and operated by one person. Other features help make the Guardian Tower effective:

We can all agree that these are unpredictable times. From the countryside to the world’s largest cities, the threat of small- or large-scale incidents looms ever larger. The Guardian Tower can be an instrument of peace and safety, helping communities keep a watchful eye on crime.

Delivery of the Guardian Tower is faster than the industry standard and comes with a one-year warranty. Reconview is able to customize their towers with a range of equipment such as thermal cameras, beacons and PA systems to meet each client’s specific needs. Reconview, based in South Carolina, includes among its clientele the U.S. Navy, U.S. Air Force and prisons across the nation. To learn more, visit www.reconview.com.