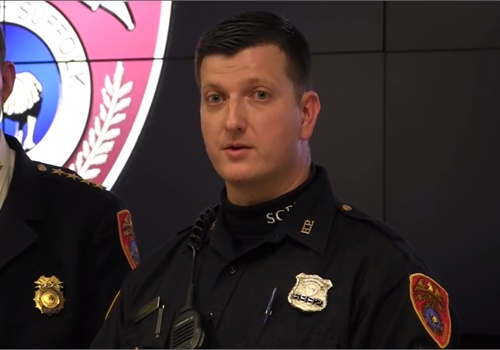 VIDEO: NY Officer Jumps into Moving Vehicle to Save Baby Inside

A Suffolk County, NY, Highway Patrol Officer jumped into a moving vehicle to stop a woman who was driving while ability impaired by drugs with her baby in the vehicle after she refused to pull over on the Long Island Expressway in Manorville, NY, according to a department press release.

Maria Lagatta was driving approximately 20 miles per hour eastbound on the Long Island Expressway, west of exit 70 in Manorville, when Highway Patrol Officer Joseph Goss attempted to initiate a traffic stop. Lagatta refused to pull over. Officer Goss pulled alongside the vehicle and saw a baby in the rear passenger seat. Officer Goss slowed down incoming traffic to prevent them from being rear-ended. When Lagatta slowed down to approximately 5 miles per hour, Officer Goss sped past Lagatta and parked his vehicle on the right shoulder. He then jumped into Lagatta's car, through the passenger side window, and was able to bring the vehicle to a stop. Officer Goss, Lagatta, and her 22-month-old daughter were not injured.

Lagatta, 37, of Farmingville, was charged with Driving While Ability Impaired by Drugs, Aggravated Driving While Intoxicated with a Child Passenger 15 Years Old or Younger (Leandra's Law), and Endangering the Welfare of a Child.