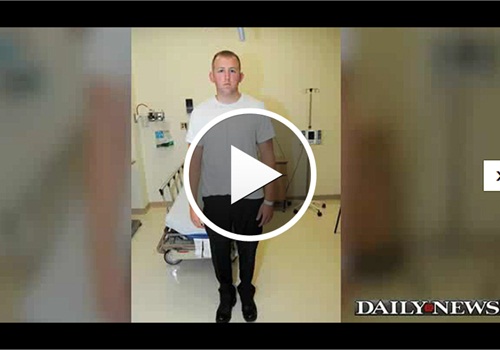 In grand jury testimony released Monday, Ferguson, Mo., Police Officer Darren Wilson said that he felt he was authorized to use force against Michael Brown Jr. after Brown punched him twice in the face.

Wilson said he went for his gun because he thought that a third punch from Brown could have "knocked me out or worse," reports the St. Louis Post-Dispatch.

He also said that that even as he was running away, Brown could have posed a threat to officers responding to his initial call for help. "He still posed a threat, not only to me, to anybody else that confronted him."

Wilson compared Brown to a demon during the struggle at Wilson's SUV. Despite Wilson's size, at 6 feet 4 inches and 210 pounds, he said that when grappling with Brown, he "felt like a 5-year-old holding onto Hulk Hogan." Brown was 6 feet 5 inches and 285 pounds, according to one autopsy.

Wilson said the he fired his gun twice in the car. He began shooting again after Brown ran away, stopped, turned and began coming for Wilson, with his left hand clenched at his side and his right hand under his shirt, at his waistband.

Wilson's testimony about an encounter that he estimated lasted less than a minute was among thousands of pages of documents released by the St. Louis County prosecuting attorney's office after the grand jury decision was announced. The names of most witnesses were redacted.